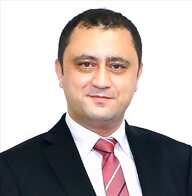 Abdullah Yüksel was born in 1977. He graduated from Business Administration Department of Marmara University. He began his career at KPMG in September 2000. He took part in many prominent companies’ auditing processes. Serving at KPMG’s auditing arm for ten years, he continues to serve the company as Senior Audit Manager.

Mr. Yüksel has been serving our company as Deputy General Manager, Financial and Administrative Affairs since his appointment on 01.10.2010.